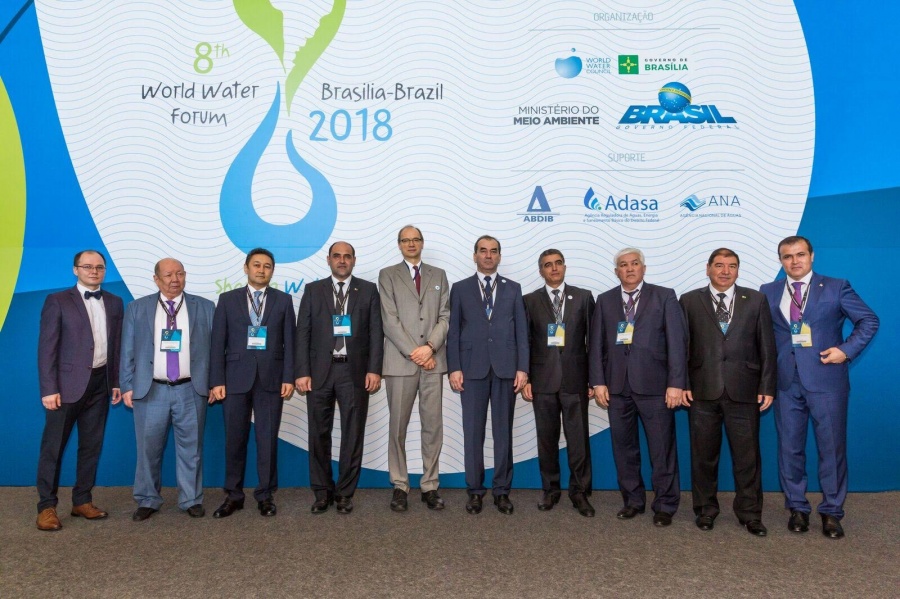 BRASILIA. On March 21 CAREC and the Executive Committee of the International Fund for Saving the Aral Sea (EC IFAS) held a joint event "Transboundary Water Cooperation in Central Asia" in the frame of the 8th World Water Forum, the world's most important event on the water. About hundred participants visited the event, where the key persons of the states, diplomats, development partners, scientists and youth discussed water resource policies and regional projects.

Speakers underlined the main challenges of Central Asia: high share of transboundary rivers and water bodies, the Aral crisis, exchange of data, the harmonisation of legislation, balance between the environmental, social and economic interests of neighbouring countries. One of the most challenging issues of the region is the environmental crisis of the Aral Sea basin.

"The Aral Sea crisis is one of the biggest disasters of the last century that went beyond the Central Asian region"  noted the Extraordinary and Plenipotentiary  Ambassador of the Republic of Kazakhstan in Brazil Kairat Sarzhanov. He also continued that it is necessary to intensify the efforts of all countries of the world to eliminate consequences.

Today in a place where water is gone there is a desert area of 5.5 million hectares, the Aralkum desert.  Wind spreads salty, toxic sand on thousands of kilometres. 75 million tons of this dust gets into the atmosphere annually. These processes affect climate change. Due to the drying out of the Aral Sea in Uzbekistan and Karakalpak Autonomy, there is a significant temperature increase, especially in the summer season. The number of days when the temperature goes above 40°C almost doubled. Accordingly, winters become colder each passing year.

Shavkat Khamrayev, the Minister of Water Resources of the Republic of Uzbekistan, declared that the Trust Fund with an authorised capital of 2 billion dollars would be created for supporting the Aral Sea region. According to the minister, the establishment of such fund is another step forward to strengthen regional cooperation. "Integration processes in the region, political will and support of water cooperation are the main priorities of the modern policy of Uzbekistan" emphasised Mr Khamraev.

Other Central Asian countries share these priorities as well, Usmonali Usmonzoda, the Minister of Energy and Water Resources of the Republic of Tajikistan stressed that it is cooperation that lays in the solution of these set of tasks. "Only joint efforts and coordination will assist to develop adaptation mechanisms and address environmental challenges in Central Asia. A strong co-operation, therefore, will benefit economies and strengthen the development of the countries" - he added.

Another common task of the region is to find a balance between ecology, interests of society and economy. Contemporary management and protection of water resources are closely related to economic growth, social and environmental criteria of the Central Asian countries. "Turkmenistan, as the chair country in EC IFAS, is interested in making attempts to continue initiatives and in giving an impulse to strengthen cooperation both between the countries of the region and within international development partners," said the Chairman of the Executive Committee of IFAS Guizgeldy Baizhanov.

Also, during the event youth representatives declared an appeal of the civil society of the CA region. This collective statement was developed at Civil Society Forum of Central Asia organised by CAREC and Kazakh-German University in Dushanbe on 14-15 February 2018.

- Harmonization of the approach to monitoring and data exchange on water issues;

- Development of hydrometeorological monitoring network for adaptation to climate change;

"Today special attention is on educational initiatives, in which countries of our region participate together.  Because unified approach in the environmental education forms a unified approach to all cooperation aspects stated above" - concluded Farhod Abdurakhmonov,  CAREC's Water Initiative Support Programme manager.

It is still early to talk about the results of Central Asia's participation in the 8th World Water Forum. But it should be noted, that the very fact of the involvement in the most significant event of the world in the field of water resources and, moreover, the consolidated appeal of civil society, demonstrated to the world community that people of Central Asia have already joined efforts to meet environmental challenges together.